We arrived just in time at the Bay of Islands to get a glimpse of its beauty at sunset. We were so keen to finally arrive at our campground that we did not even stop to take a picture. It had been a long day after all.
The campground was really nice, probably one of the best we had been to in New Zealand. Max was happy about the playground, we liked the setting just next to the bay and also appreciated having a reliable wifi connection for a change.
We quickly agreed to stay not just one, but two nights in that nice spot. The next morning, we headed out into the bay in a kayak. Our first destination was just the other side of the bay, where we discovered a small cave and even paddled under a small natural bridge. After that, we headed towards one of the many small islands dotting the bay. That was a perfect place for a break and we enjoyed the quiet place and marveled at the many holiday homes along the hills opposite of our small islands. 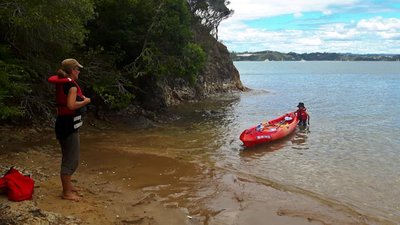 The paddling back towards the campground was fun and hot. Even though the waters of the bay looked much more inviting in their turquoise colors, we were glad that the burning sun only came out then and not earlier.
The rest of the day passed very quickly between playing, exploring the bay at low tide, editing and uploading pictures and the blog. And we felt the ‘usual’ effect coming into play: already the last couple of times our activity level decreased significantly in the last couple of days before leaving a country / continent.
There was one more thing we definitively wanted to see before leaving Northland: the big kauri forests. Therefore, we did not take the direct route back south, but headed towards the west coast.
On our way, we stopped at a viewpoint. Not expecting too much, we were very pleasantly surprised about the stunning views of the Tasman Sea, the Hokianga Harbor and the massive sand dunes on the opposite side. 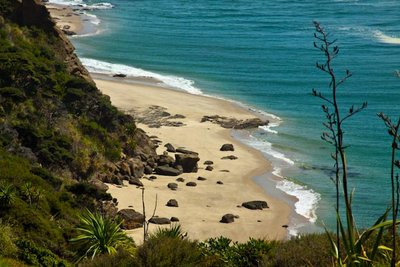 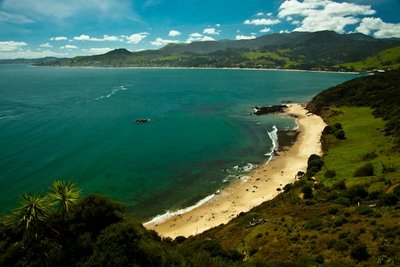 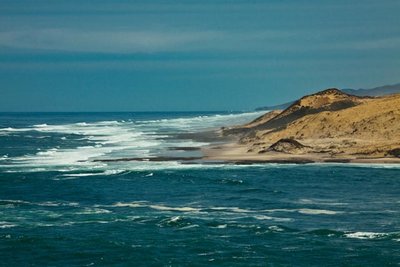 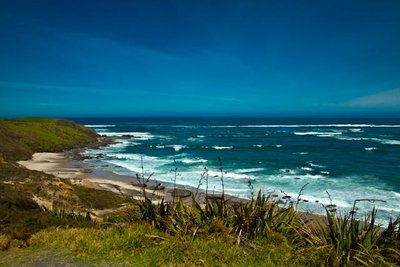 From there it was just a very short (but windy) drive to Waipoua Forest, the home of Tane Mahuta, the largest living kauri tree in the world. It is estimated to be somewhere between 1250 and 2000 years old. Even though kauris don’t get very tall compared to other species of trees (Tane Mahuta is ‘only 51m high’), they grow very big in diameter. 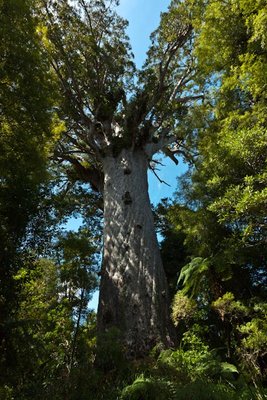 A bit further, we saw some more examples of big kauris, the ‘Four Sisters’ and the ‘Te Matua Ngahere’ which is not as high as Tane Mahuta, but with more than 5 meters diameter even thicker. We love big trees, so the detour to see these massive examples was definitively worth the effort. 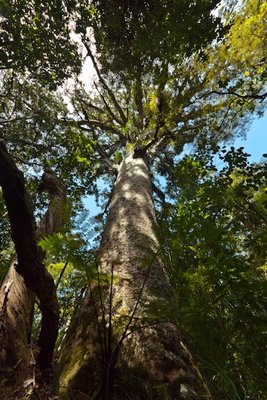 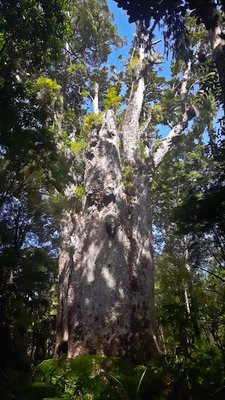 We had toyed with the thought to spend our last two nights at a beach on the west coast. In light of the bleak weather forecast which projected two very rainy days, we rather went for a place along the road into Auckland. Even though it was located along our way, that left quite a long drive to get to the northern outskirts of Auckland.
By the time we arrived, it was fairly late and consequently we slept until late the next morning. Luckily, the rain only started in the afternoon, such that Max and Sam were able to enjoy a nice morning at the beach. They were even able to find a buyer for Max’ bike. It’s always great to know there will be a happy next user.
I used the quiet time while they were gone to pack all of our stuff. Considering that we’d now be changing our style of traveling from road tripping in a van to backpacking Asia, there’s a lot of stuff we were able to discard. Given the closeness to Auckland, the campground featured a big ‘for free’ box for people to leave things they don’t need any more and for newcomers to take. And in fact, already by the time we left the next morning, some things like our picnic blanket seemingly had found new owners.
With everything packed up, we were ready to hit the road again. As our plane would be leaving only very late, we had a full day to spend. After running some errands (such as donating some of our not needed stuff at a local hospice shop), we spent some time in downtown Auckland. Given the wet weather, we did not explore too much, but rather spent our time in a nice an cosy café. 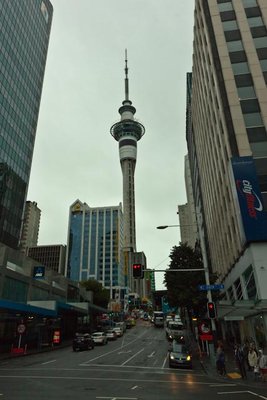 While Max got to work off some energy at a playground, we got the van in shape and eventually returned it at the rental agency. We were quite happy that the van had survived the over 6000 km we drove without any incidents, accidents or breakdowns. But still, we could not resist to give the company a full list of defects on the vehicle. Even though the 50 NZD discount we received, seems like a very small token, it shows at least that our complaints were heard.
Their shuttle bus took us swiftly to the airport and before too long we were standing in line at the AirAsia counter to get our boarding passes. With those in our hands, we had a couple of hours to kill before our plane left. As we know Auckland Airport quite well thanks to Jetstar messing up our flights from Rarotonga to Sydney exactly 4 months earlier, we knew our way round very well. We spent our time in the café with the nice view and contemplated on how quickly time is passing. 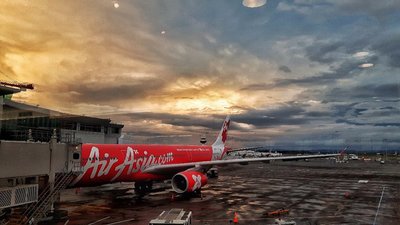 And then it was time to say good bye to New Zealand and to brace ourselves for the fun awaiting us in South East Asia. As much as we liked our travels so far, we had done enough road tripping. We were very much looking forward to a more adventurous style of traveling and exciting cultures and foods awaiting us.