The Southern Forests are dotted with national parks. Their most well-known attraction is the tree top walk in Walpole-Nornalup National Park through one of the rare red tingle forests. As we reached the carpark, it was apparent that this is the time when all Aussies seem to be traveling. It was like a zoo with people. Luckily we somehow found a parking spot and got our tickets.
The tree top walk itself was simply spectacular. Via a ramp we walked up to 40m from where bridges connected various platforms at that height. It was a completely different perspective of the forest, but also the structure itself was fascinating. 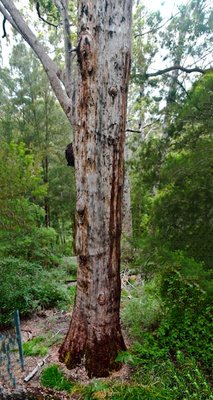 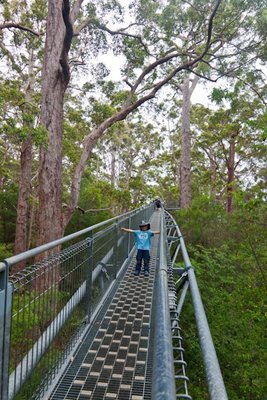 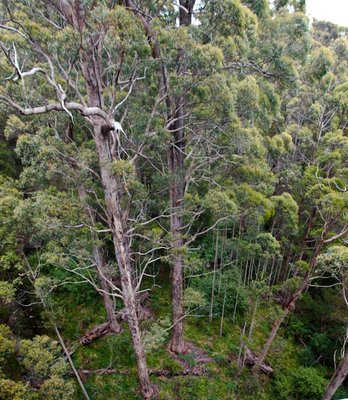 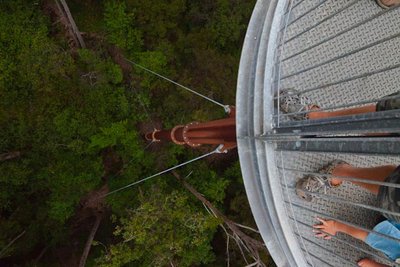 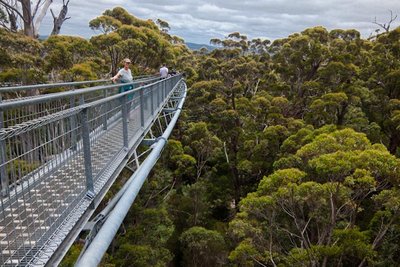 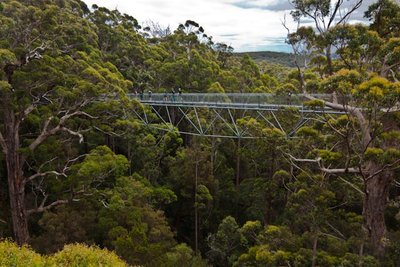 The walk along the bottom of the tingle forest was very nice as well. And luckily, the masses dispersed a bit as we hiked on. Still, it was really crowded and we only realized when leaving how lucky we had been to arrive early in the morning. By the time we left, the line to buy tickets ended all the way out in the carpark while in the morning there was hardly anyone in front of us. It had been nice seeing the tree top walk, but we were not sad to leave the crowds. 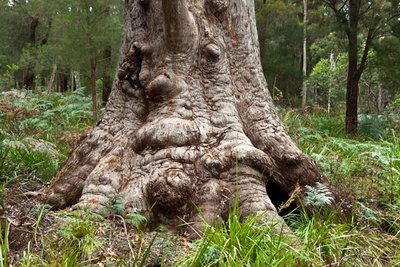 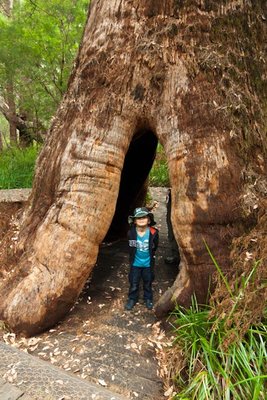 We headed to the coves of William Bay NP. Elephants Cove was really nice and we enjoyed seeing the big rocks in the turquoise waters. Green’s Pool on the other hand was extremely crowded and after having had a glimpse, we decided to rather head on. 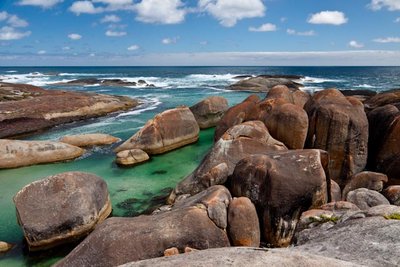 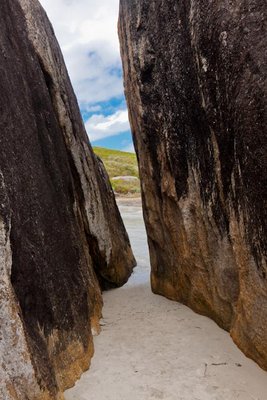 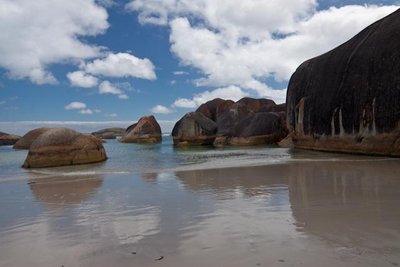 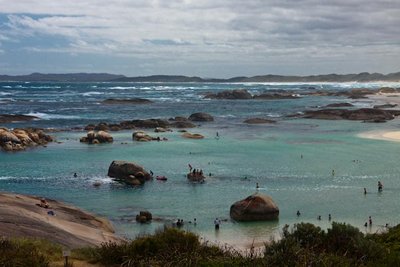 After all, we did not have a reservation for a campground yet and it was already 4pm in the afternoon. While Sam and Max went shopping in Denmark, I called one campground after the other to find out that most of them have been booked out already for weeks. Eventually I was lucky after all: Carol at the Albany Holiday Park promised to keep a site for me if we arrived by 5pm. Even though Albany was still a 50km drive away, we managed and were happy to have a site secured in this busy holiday period.
With New Year’s Eve approaching, we did some research and found out that the only firework displays in that region will be taking place in Albany and in Esperance. Rather than rushing those 500km east to Esperance, we decided to stay in Albany until New Year’s Day.
Albany is a nice town to explore with lots of historical buildings from the early settlement of Western Australia remaining. It is also known for its role in world war I having been the last port of call for the troops heading to Europe and ultimately Gallipoli. That might also be the reason that it is the location of the national Anzac (Australia and New Zealand Army Corps) Center, that had been built for the centennial celebration of the forces leaving in October 2014.
We opted to rather explore the nearby Princess Royal Fortress vs. the Anzac Center in Heritage Park. The reinforcements in the hills with its cannons protecting the harbor reminded us a bit of what we had seen at Fort Casey or Fore Ebey in Washington State. Except that in the Us we would probably not have come across a bandicoot. 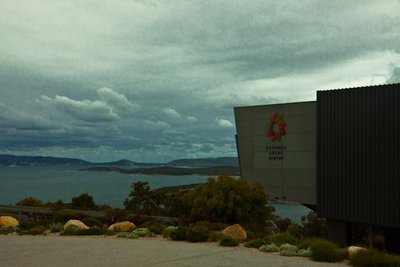 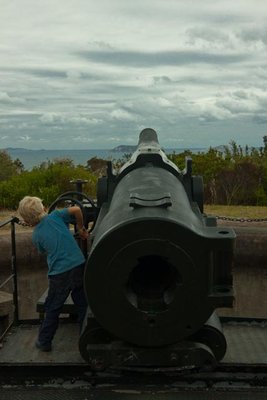 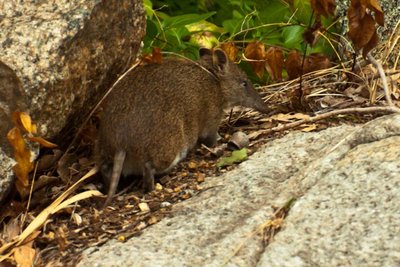 Then it was time to go into town. We had deserved a break in a local café. When strolling by the old town hall building a little later, we were invited in. Just then an art exhibition of local artists was opening and we were among the first people getting to have a look. 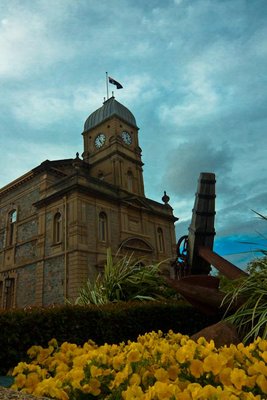 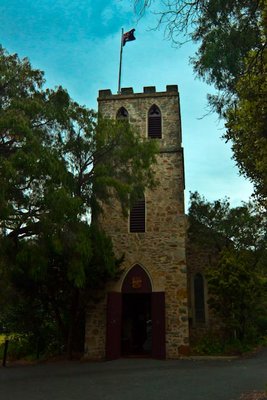 Back at the campsite, we had a great BBQ and worked on our blog in an attempt to catch up. Considering how far we’re behind, this effort continued also on New Year’s Eve. Anyhow, after a couple of days in a row of exploring, it helped to have a rather quiet day again.
In the late afternoon, we headed off to a rather special skate park called snake run, winding its way down a hill. There was quite a crowd of people at the skate park. The adults sitting together having relaxed chats while their kids hit the track.
Seeing some probably five-year olds hit the snake run on their tricycles at top speed, it was obvious that they did not do that for the first time. Otherwise their parents might not have watched them with such an ease of mind amidst the excitement and fun of all the other onlookers. But an older guy taking on the track sitting on a skateboard had the full attention of the crowd and caused a big roar of laughter when he eventually fell off.
Amidst that fun, Max hit the track with his bike. And a couple of minutes later Sam joined him on a bike he borrowed from one of the people watching who lived next door. Its hard to tell who of the two had more fun. 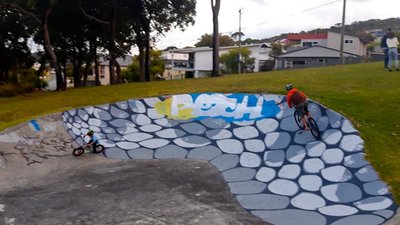 Eventually, Sam had exhausted enough energy and sat down for having a chat again, while Max continued with his seemingly endless energy. Unfortunately, his concentration is not endless and eventually Max jumped and fell hard. Luckily, he had been wearing his helmet and other than a bloody lip, a bruise on the forehead and a scratched elbow.
While we would have preferred for Max not ending up in a fall like that, the incident got us invited at the New Year’s Eve party of the people living next to the skate park. The party also celebrated their good bye before heading off on a yearlong travel through New Zealand and Australia. We found enough topics to talk about.
Eventually, we joined them in hiking up the hill behind their house to watch the fireworks from Mount Clarence. Conveniently enough, most Australian cities offer two fireworks: the family fireworks at 9pm and the midnight firework. It was a great firework and we all enjoyed the displays. with its smiling faces and the outline of Australia lighting up in the harbor below us. 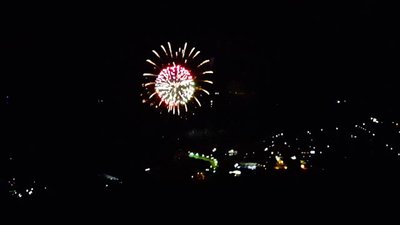 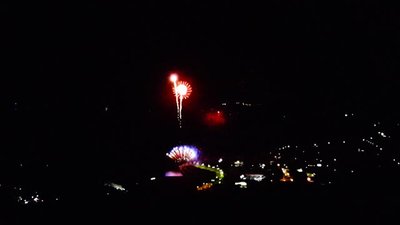 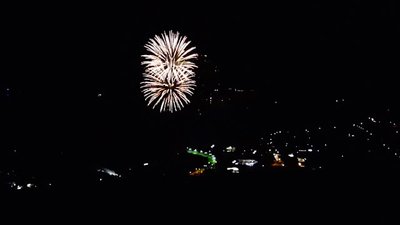 An hour later, we were home again and Max was sound asleep in the roof top tent. With private fireworks being absolutely forbidden and not even available for sale and the official firework displays taking place a couple of kilometers away in the harbor, this marks probably the quietest year change we’ve experienced so far (and potentially ever will?!?). Also at the campground no one seemed to be celebrating, so Sam and I were on our own dancing the traditional Viennese Waltz at midnight and toasting with sparkling wine. And thanks to Irmi and Lotte’s well timed call at one minute after midnight, we even got to exchange new year’s greetings with family – just as usual. And yes, we could not refrain from sending out some messages to friends and family to tell them that for us the new year has already started seven hours earlier than if we would have been back home.
Despite the fact that 2016 was seven hours shorter than a normal year, it definitively was filled with many more impressions and learnings than probably every single other year in our lives so far. And the outlook is very positive for 2017: almost certainly, it will be an equally exciting year as well!

May 2017 be a year full of excitement & meeting lots of great people all around the globe for you three!